As a noted businessman and investor who had his life story displayed on the big screen in Will Smith’s movie, “The Pursuit of Happyness,” Chris Gardner is no stranger to those looking to find a “rags to riches” story to emulate.

While Gardner currently serves as the chief executive of stock brokerage firm Gardner Rich & Co., there was a time in his life when he wondered how he would pay his bills. In fact, as anyone who has seen the film knows, he was once a homeless single father living in San Francisco. But he worked. He was a stockbroker trainee at Dean Witter Reynolds making approximately $1,000 per month and fighting to be one of 20 trainees to be offered a full-time position, which he ultimately earned.

In the film, Will Smith’s Christopher approached a well-dressed man in a red Ferrari on the street and asked: “What do you do?” Gardner actually did this, too. However, it was a bit different than depicted in the film. Unlike the movie, Gardner approached this stockbroker in a parking garage, and the broker then followed up and met him for lunch to explain the basics of Wall Street, forever altering his life.

Gardner became a multimillionaire by using what he learned in a New York brokerage firm, working his way through the company and making savvy financial investments. Eventually, Gardner began his own stock brokerage and has been CEO ever since.

It was his hunger and desire to succeed that helped him become rich. The brokerage firm was just the path he chose to get there. 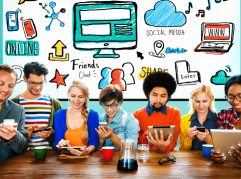 ← Investing For Millennials: Never Overpay For A Stock (previous entry)
(next entry) Tell Us Your Story →
©2022 Education First Credit Union -Serving the Education Community since 1936